The Story of the Lost Stained Glass 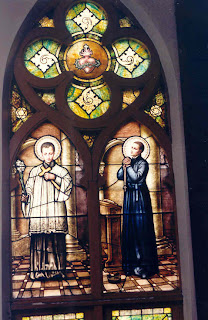 Care and Share got the former cathedral church when they purchased the former rectory and adjacent land. The plans were to expand the Care and Share Homeless Shelter and they did that. They never wanted the former Cathedral, but it was part of the package. Minnesota Housing Finance Agency funded part of the project, said Jan Delage. Sister Justina was in charge of the Care and Share Board at that time. People constantly approached Care and Share about the cathedral. People were very interested in its future. Of course, the non-profit homeless shelter did not have funding to tear it down (estimated at that time $35,000) nor did they have a use for the building. The board was concerned about preserving the stained glass. There were problems with the high school kids smoking and lounging behind the church. Stones were thrown and some of the storm window glass was broken.

In an effort to preserve the glass, Care and Share gave the ventilator windows with family names on them to those families and sold the rest of the small ventilator windows. Somehow a priest, Fr. Tom Foster, of the Diocese of Duluth got word of the preservation effort and approached Sr. Justina about acquiring 10 of the windows for a planned new gothic church to replace St. Rose of Lima’s in Proctor, MN. He wanted the St. Rose of Lima window in particular. The priest talked to the congregation about his plans during mass. (Crookston Times)
Sr. Justina sold 10 windows to him for a total of $5,000. (Sister Justina telephone visit) Fr. Tom Foster hired Lightbenders in Fargo to remove them and restore them. Subsequently the new gothic church plans went by the wayside as the Bishop in Duluth refused to build with the intention of using the old windows. Lightbenders never got paid for the work they had completed, so they sold five and still have five windows, some of which they had already completed restoration work. The ones they have may be the Immaculate Heart, the Sacred Heart and two to the left of sacristy door. (Anyone know the figures on those?) Plus they have an angel window. The value of these windows (besides emotional value) is about $3500 a window, based on one window being 30 square feet. These windows were high quality, Munich Art Glass, Tiffany type of landscape glass, and then hand painted.
Lightbenders left the “eyes,” small pieces of red, green, or gold glass behind, but has four Star of Davids. One window remains to the left of the main door, and the stairway to the choirloft goes right next to it. This was common practice in this neo Gothic style.
Sister Justina advertised for bids for the remaining stained glass windows. Pat Spicer, Spicer Stained Glass Studio in LaPorte, Minnesota won the bid for $30,000. He got all the windows except what Fr. Tom Foster got. Pat and Sister Justina tried hard to get these windows back from the priest and were blocked at every turn. Pat Spicer proceeded to advertise heavily in local papers to sell the small pieces: the emblems, and Stars of David to local people. He spent $500 in advertising in Crookston and Grand Forks that these were available to anyone and included the sale of these smaller pieces in the Ox Cart booklet. Does anyone know what year that was? 1993? He sold them at OxCart Days and his booth was packed with local parishioners. There were 12 emblems. A couple of people got them besides Bishop Balke who has two emblems.
Pat heard of the group trying to save the former Cathedral. It was just a committee at that time. He made several attempts to sell the windows back to this new group in 1996, but they weren’t organized yet, and didn’t have that kind of money. Pat restored the large windows and sold them to four churches/convents throughout the nation, just ten years ago! 20 apostle/saint windows were sold. One church needed the four apostle windows, Mary of Aloqui, one more large window plus 16 smaller windows. The Assumption window over the choir loft and the Transfiguration window were sold to two different Sister of Mercy Convents.
Pat will sell back to us at a reasonable rate. He recommends a window committee to decide what we want to do. Fit them back in exactly as they were, hang in the openings, or fit back in with more glass as fill.
It may be possible to reconstruct the entryway of the church by piecing pieces together. He could fill the three clovers if someone would donate one emblem. A great deal of woodworking would be required to install the glass back in the wood openings. Much of the custom made trim is missing and some of the window framing is damaged now, although there are craftsmen available to do the work.
New energy efficient, clear windows are estimated to cost: $157,231 as of August 2006.  Grandma's Attic in Bemidji, MN is now selling off the last of the windows belonging to Pat.  One is sold already.
Bishop Balke Care and Share cathedral Cathedral of the Immaculate Conception Crookston Crookston MN Minnesota Sister Justina

Popular posts from this blog

Updated Activities of the Board

May 31, 2017
2016, Feb 29, Discussion of a pancake fundraiser, this time, with the Restaurant providing the pancakes.  Met with Caroline, the architect from MNHS, met with Ken Muldeen from Marvin Windows. He said it would cost about $180,000 to provide new custom windows, but not likely to be approved by MNHS.  New website set up on Wix.com, still prairieskyline.com. Getting estimates on steeple leak. Applied for grant from American Crystal 2016, April 30 Annual meeting combined. Held after the RBJ's fundraiser.  Recognition of Cindy for her creativity on the display, and to Andy with the huge Cathedral mailing. Paid Zach of ZJ Construction to board up five windows and repair leak.  Later, he boarded up the front window and two small windows with hurricane clips. The rewrite of the Conditions Assessment and Photos were not acceptable to MNHS, so we will not be able to finish the Architect grant in time to apply for another Legacy grant. Priorities were made in a motion to next focus on pro
Read more

Daycare in Methodist Church, Kids Zone Goal, and a process for doing it all

May 06, 2019
On April 19, the Prairie Skyline Foundation (PSF) offered the former Methodist Church as an in-town site for a large daycare to Craig Hoiseth of CHEDA.  Kay Hegge, Board Chair of PSF, showed the building to Hoiseth, and although much work is needed, the value of the building could be clearly seen.  The big advantage is size.  There are 12 large “Sunday School Classrooms,” a small gymnasium, a place to hold small plays, a dining room, offices, and a kitchen.  PSF obtained the building from Rainbow Ministries who were letting it go to back taxes.  “We all know what happens to tax-forfeited buildings that are dumped on the County.” said Hegge, who had experienced first hand Polk County’s preference for tearing down historic buildings. We don’t need any additional work right now, so we are just going to get the electrical and heat going again while gathering estimates on the roof. Craig Hoiseth explained that a daycare will need a fire suppression system, become ADA compliant, it needs a
Read more